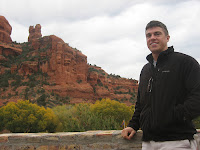 After taking a bit of time off of blogging to travel and move, I'm back and ready to share some great content. I spent the last week of March in Scottsdale, Arizona where I visited a friend who I went to Fisher (Ohio State University's Business School) with. It was great to see the progress he has made in his entrepreneurial pursuits in the real estate market. With rising foreclosures, he has found a niche in working short sales where he locks up properties at 70-80% on the dollar and flips them to other investors. He has now closed five deals since January - not a bad learning curve given that they will only finance deals that net at least 10k.

The first week of April I spent in New York City (actually the 29th-3rd). There, I stayed with a great friend from High School who now attends King's College in the Empire State Building. He's extremely hard working and I'd bet a lot that he becomes a celebrity. He has an uncanny ability to control crowds of people and has already been on TV several times in NYC at random, started a vending business, and is launching a clothing line. Needless to say, he's one of those friends who I can really sharpen my iron against.

I arrived on Thursday night from Columbus and we attended an Anthony Robbins Confrerence on Thursday (2pm - 12:30am), Friday (8am - 11:30pm), Saturday (8am - 11:30 pm), Sunday (8am - 1:30am), and Monday (8am - 5pm). The entire experience was incredible. If you ever have the opportunity to see Anthony Robbins Live jump at it. I would only describe it as this - when I left it was like I had been living in black and white and now everything was in vivid color.

I'm back in classes and have had the opportunity to take an MBA class on entrepreneurship and development which has turned out to be a great choice. The most value I've gotten out of the class thus far has been the networking opportunities and in depth case analysis on Hotmail, Ford, Starbucks, and Ebay. If you have a minute and you're an entreprenuer it is worth your while to watch the Charlie Rose interview with Howard Schultz. It's a great interview and you can grasp a lot of great business lessons out of it.

On another note, I ran my first half marathon this weekend with my good friend Lee Shadle (www.pestobistro.com). I ended up running most of the race with a 71 year old man named Jim who was running his 165th half marathon and had run 41,000 competitive miles. Pretty wild. Anyway, I had a great conversations with him and another guy named Kevin who was running the race to celebrate his 50th birthday. I thought, "What a better way to celebrate your birthday". Instead of slowing down, he's decided to speed up. We had great conversations and we'll be running the Columbus Marathon in October together which will be nice.

If you're up for running the half in Columbus in May or the full in October let me know. Best, Eric
Posted by Eric Corl at Sunday, April 15, 2007